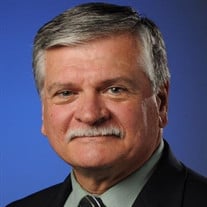 Richard Michael Maas, age 65 of Dadeville, died at home January 28, 2019 after a battle with cancer, surrounded by his loving family. Rick – known by many as Duke – was blessed with over 43 years of marriage to his loving wife, Cheryl (Snyder) Maas and was the devoted father of Erik (Courtney) Maas of Alabaster, AL, and Kristin Maas of Mobile. He is survived by sisters Linda (Ralph) Kessler of Carey, OH, Marianne Maas of Rossford, OH, and brother Joseph (Brenda) Maas of Rossford, OH. Also surviving are six nieces, five nephews, four aunts, and dozens of cousins. A member of Sardis United Methodist Church, Dadeville, Rick was preceded in death by his parents, Urban “Pat” and Margaret (Burgei) Maas, sister Donna Sherwin, her husband Chris, nephew and godson Matthew Kessler, nephew Luke Kessler, niece Dora Fought and father-in-law Louis Snyder. Born in Toledo, OH, on May 1, 1953, Rick was a graduate of Bowling Green State University, where he and Cheryl met and fell in love. They were married August 1, 1975. A longtime journalist, Rick spent much of his career covering sports. He started at The (Toledo) Blade as a phone clerk at age 14, later led several award-winning sports and news departments, and eventually rose to role of executive editor at The Tampa Tribune in 2012. Rick made other career stops at The Roanoke Times, the St. Petersburg Times, the Pittsburgh Tribune-Review and the Opelika-Auburn News, where he retired in July, 2018. As he and Cheryl moved around the country, Rick applied his faith in his daily life, as well as a volunteer youth coach and in roles at several churches, serving on education and youth committees, teaching Sunday school, leading small groups, serving as a Eucharistic lay minister and as an elder. A memorial service will be held at 11 a.m. on February 9, 2019 at Zion Evangelical Lutheran Church, Waterville, OH. Internment will take place during a private ceremony at Lake Township Cemetery, OH. An additional memorial service will be held at Sardis United Methodist Church, 10367 Hwy 50, Dadeville, on February 23, 2019 at 2 pm. The family respectfully declines the gift of flowers and requests memorial donations be made to Sardis United Methodist Church, Lei Smith Bledsoe Fund, c/o Treasurer, P.O. Box 162, Notasulga, AL 36866 or Ivy Creek Hospice, 201 Mariarden Road, Dadeville, AL 36853. Langley Funeral Home, Dadeville, AL, is handling arrangements. Memorial messages may be sent to the family at www.langleyfuneralhome.com.

Richard Michael Maas, age 65 of Dadeville, died at home January 28, 2019 after a battle with cancer, surrounded by his loving family. Rick &#8211; known by many as Duke &#8211; was blessed with over 43 years of marriage to his loving wife,... View Obituary & Service Information

The family of Mr. Richard Michael Maas created this Life Tributes page to make it easy to share your memories.

Customized sympathy cards. Mailed for you.