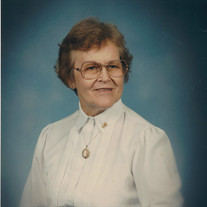 Vivian J. Langley 1921-2016 Vivian J. Langley was born on June 30, 1921 in Camp Hill Alabama, to proud parents Mr. John Langley and Ernestine (Nee Bruce) Langley. She was preceded in death by two brothers and their wives, John Eldred Langley (Addie Mae Willoughby) and Lemuel Bruce Langley (Mary Wyatt); and one Sister, Miriam, who died at birth. She passed away on Monday, February 15, 2016 at Dadeville Healthcare Center. Two nephews survive her: Mr. John Randolph Langley (Sandra) and Mr. Ernest Wade Langley (Debbie). Ms. Langley as she was commonly called, attended Howard College now known as Sanford University of Birmingham Alabama, where she graduated with a BA, majoring in English and Religious Education. She then went to the South-Western Baptist Theological Seminary at Fort Worth Texas with a Th. B Degree. A Doctor of Divinity was conferred upon her by the Virgin Island Baptist Mission. Vivian’s life was one of surrender and service to the Lord from her youth. She accepted the Lord at the tender age of ten at Camp Hill Baptist Church. Without wasting any time, she embarked on her first missionary journey to Nigeria Africa, where she served from 1946 to 1949. From 1950-1961, she moved to Natchez Mississippi, where she served with the West Side Baptist Church in such capacities and at different times as Youth Leader, Choir director, Teacher, worked with the visitation team, served as a Music Teacher while she also was part of radio ministry, called “Christ is the answer”. Her love for the foreign Mission field could not keep her in the USA, so in 1962, she headed to the Caribbean, where she served primarily in the United States Virgin Islands. She worked with the Bovoni and Bethel Baptist Churches as Organist. Ms. Langley worked tirelessly as a lecturer and instructor at the Virgin Island Bible Institute. She also served as Secretary to the Virgin Island Baptist Mission. She was an accomplished Musician. She played the Violin, Accordion and Piano with excellence. Above all she was a child of God, who did the work of an evangelist, and maintained her stand as a Kingdom Carrier, to the ends of the earth. Vivian J. Langley: Quote: ‘The ups and downs of my life have to speak for themselves.’ We can safely say that she has fought a good fight, she finished her course, and she kept the faith. Henceforth is laid up for her a crown of righteousness, which the Lord the righteousness judge shall give to her. Funeral service will be Wednesday, February 17, 2016 at 11:00 am at the Chapel of Langley Funeral Home. Mr. Chuck Fletcher will officiate. Burial will follow in the Camp Hill Cemetery. The family will receive friends on Wednesday, February 17, 2016 from 9:00 am to 10:30 am at Langley Funeral Home. In lieu of flowers, contributions may be given to Camp Hill Baptist Church for Missions, P.O. Box 543, Camp Hill, AL 36850 or Camp Hill Cemetery Fund, P.O. Box 217, Camp Hill, AL 36850. Memorial messages may be sent to the family at www.langleyfuneralhome.com. Langley Funeral Home is in charge of the arrangements.

The family of Ms. Vivian J. Langley created this Life Tributes page to make it easy to share your memories.

Send flowers to the Langley family.