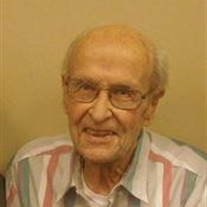 Mr. Walter Hix Brazell passed away peacefully in his sleep on Nov. 3, 2013 at the Olivia White Hospice facility in Flagstaff, AZ. He was born in Camp Hill, Alabama on Mar. 26, 1923. He is now at home in heaven with his Lord and Savior. Walter proudly served his country during WWII in the U.S. Army, stationed in northern France from May 1944 to December 1945. He was an antiaircraft gunner and rifle marksman who received several medals. After moving to southern California, he worked in the aircraft industry for many years until his retirement to Sedona in 1985. He later moved to Flagstaff. He loved to root for his home state football universities, Auburn and Alabama. He enjoyed woodworking at home. He was described by his closet friends as a “true gentleman”. His work ethic was second to none. He was a great husband and father. He will be dearly missed by all his family and friends. Walter is survived by his loving wife of 66 years, Shirleen, of Flagstaff, AZ; his sons, Tim of McLean, VA and Steve (Becky) of Dewey, AZ; his grandchildren, Jason (Tina) of Los Angeles, Nathan (Tori) of Surprise, AZ, Jeremy (Brittany) of Dewey, Joshua (Maria) of Bagdad, AZ, Dannae of Dewey, and Adrian and Camille of McLean, VA; his great-grandchildren, Bowdoin, Barrett and Giovanna of Los Angeles, Aviana and Aspyn of Bagdad, and Abby of Surprise; his half-brother Preston (Deborah) Brazell of Opelika, AL; and nieces and nephews. He is also survived by two of his closest friends of many years, Ted and Rita Taylor of Carson City, NV, who we consider an integral part of our family. He was preceded in death by his four brothers and two sisters. A memorial service will be held on Tuesday, December 17, 2013 at 1:00 pm at the Camp Hill Baptist Church. Burial will follow in the Camp Hill Cemetery with veteran honors provided by the United States Army. In lieu of flowers, the family suggests a donation to foreign missionary work at the Potter’s House Christian Fellowship Church, PO Box 2448, Prescott, AZ 36302. Langley Funeral Home in Camp Hill is in charge of the arrangements.

Mr. Walter Hix Brazell passed away peacefully in his sleep on Nov. 3, 2013 at the Olivia White Hospice facility in Flagstaff, AZ. He was born in Camp Hill, Alabama on Mar. 26, 1923. He is now at home in heaven with his Lord and Savior.... View Obituary & Service Information

The family of Mr. Walter Hix Brazell created this Life Tributes page to make it easy to share your memories.

Mr. Walter Hix Brazell passed away peacefully in his sleep on...

Send flowers to the Brazell family.